My intern demanded that if I were to justify her labor, she should learn a thing or two, so we made dinner together last night.  I had a 3.5 pound brisket in the freezer from Edgar (the grass-fed cow I split with friends) and she was craving mashed potatoes, so this is what we whipped up.  The whole meal was made with one pan and one bowl, so she wouldn’t have too many dishes to do. 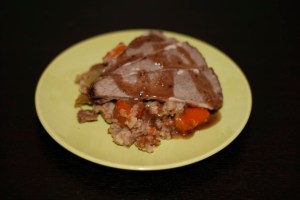 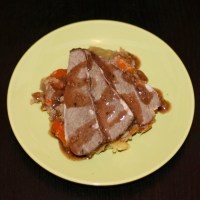 I got great feedback on these meatballs yesterday, even from professional chefs who asked me about technique and seemed impressed, and one gal told me she loved them because they reminded her of her mother’s home cooking in India. I thought I would share the recipe.  It makes a big batch, but they freeze well. 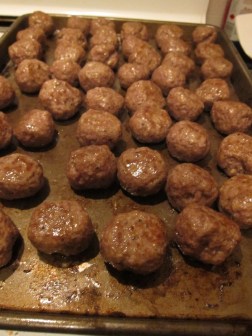 Blend shallots and garlic in food processor until nearly a paste but still chunky.  Saute shallots and garlic in bacon fat for five minutes, until soft, but don’t allow to brown.  Add spices and stir for a couple minutes to make a paste.  Allow to cool for a few minutes so it doesn’t cook the eggs, then stir in syrup and eggs and then bread crumbs.  Incorporate thoroughly into the lamb and refrigerate one hour.

Preheat oven to 375 and split the meat into 6 equal pieces, split each of those into 4 equal parts and then quarter those quarters and pack each into a sphere (Note, after the first few, you will get a sense for how the proper size feels in your hands and you can add from bigger ones to bolster the smaller ones). Arrange on two sheet pans and bake 12 minutes, flipping once half way through. 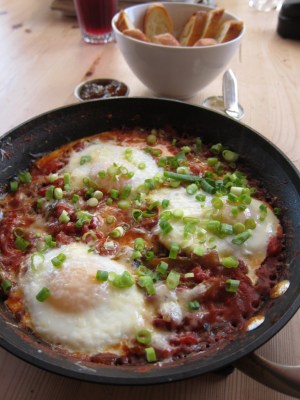 Shakshouka is the Israeli equivalent of Huevos Rancheros or the Turkish dish Menemen. Here’s my take on the theme, which makes an amazing, complete breakfast that will impress.

If you are expecting a date to end after breakfast, or you are having someone over for brunch and would rather hang out over coffee than over the stove, you can make this dish the night before, then just reheat it, crack in some eggs and toss it in the oven for a few minutes.

This dish is also great because you can make with just one pan, one knife or a mandolin and one spoon.

1. Add the oil to an ovenproof skillet and cook the onion and garlic over medium heat until the onion becomes soft and translucent. Add peppers and cook for 2 minutes. Add the paprika, red pepper flakes, cumin, sugar and bay leaf and cook, stirring occasionally, until fragrant, about 2 minutes.

2. Add the tomatoes to the skillet and bring to a simmer. Reduce the heat and simmer, stirring occasionally, until the tomatoes break down, about 20 minutes. Discard the bay leaf and season with salt and pepper to taste.

— This is where you can let the pan cool, cover it and toss it in the fridge overnight.—

3. Preheat oven to 400. Bring the sauce back to a simmer on the stove (this would also be a great time to toss in some chopped up, cooked bacon, if you’re into that sort of thing), then crack the eggs over the sauce and transfer the pan into to the oven and bake until the egg whites are set but the yolks are still soft and runny, about 7 minutes. Garnish with cheese and scallions and serve immediately with crusty bread for dipping.

Note: To roast peppers, hold them with tongs over the flame on a gas stove until black and blistered on all sides, then rub off the skin under cool tap water. A colleague asked me sheepishly for recipes the other day because, she admitted, she doesn’t know how to cook meat. I was shocked, because she is an amazing baker, and I have had many tasty delights created by her hand. I am starting off with a foolproof steak procedure. It’s hardly a recipe; there just isn’t that much to it. Sprinkle both sides with salt (twice the amount you would expect) and fresh cracked pepper.
(I also use the generic spice blend from Trader Joe’s that comes in a grinder, but it isn’t crucial.)
Get a skillet flaming hot while you olive oil both sides of your steak.
Put the steak in the pan, prettiest side down and sear for 4 minutes to get a great crust.
Flip the steak, sear another 4 minutes and remove to a plate to rest for 10 minutes. After stealing two sips of a friend’s Ramos Gin Fizz at Rickhouse, I wanted to make my own.  It’s one of those drinks that you don’t order just anywhere and it’s rarely worth the effort to make unless you are really trying to impress someone. 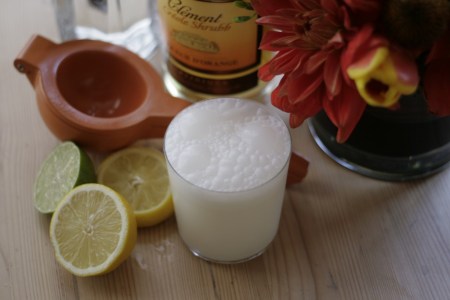 Combine all ingredients but soda and shake with ice for 2 minutes.
Strain into a collins glass and top with soda water.

I just found out that it’s National Oyster Day.

Pairing drinks with food may consider the flavors, smells and even textures of a dish, but rarely the motion involved in its consumption.

Pairing shots with oyster shooters is a great way to enhance the sensory experience, and to move the accoutrement off the oyster and into a glass.

An for those of you who don’t like oysters, just remember that taking a shot first makes anything more palatable.

Here are a few of my favorites:

As promised, I bought an ice cream maker and started concocting my boozey Vice Cream.  The first batch is fantastic. 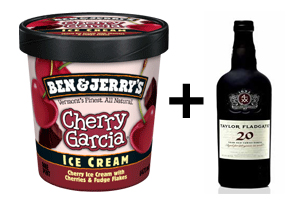 Stir together sugar and starch and whisk in egg yolk, then milk.  Over medium heat, stirring constantly, bring to a boil and continue stirring for 2 minutes.  Remove from heat and pour into a chilled bowl, stir in vanilla scrapings, cover and chill.  Once cold, whisk in cream and put in ice cream maker (mine took 20 minutes, but follow the instructions on your own), and then stir in cherries and chocolate before covering and putting in the freezer to harden.

Notes:  scalding milk is simply bringing it briefly to a boil, which will cause solids to separate from the milk and stick to the pan, so they are left behind when you pour off the milk.  To make the cherries, put a cup of dried bing cherries in a cup of good port and let them sit, covered at room temperature for a few days.

Because I couldn’t just spend the weekend celebrating the 4th and packing for Tales, I: For years I’ve been making cocktail ingredients at home. I’ve mentioned some favorite infusions and liqueurs, including roasted ginger vodka, chipotle tequila, firewater, pumpkin pie spiced rum and kumquatcello, but I have also been making sweeteners, including grenadine, flavored syrups and marmalades, and novelties like dried bing cherries reconstituted in port.  I’ve been wanting to make aromatic and potable bitters, but I haven’t gotten around to procuring the obscure ingredients.

Most recently, I remembered an experiment from my college days, dissolving a bag of gummy peaches in cheap peach schnapps, making a sweet, peachy goo that dissolved well in other things.  A month ago, I bought 5-ounce bags of Haribo Peach Rings and Fizzy Cola and dissolved each in a cup of vodka. After a couple weeks, both batches had reached an oozy equilibrium, but I haven’t concocted any good uses for them yet.

The latest trend according to GQ is Liquid Smoke, which is simple to make, but a slow, involved process.  As far as I am concerned, liquid smoke is already a common cocktail component called BOURBON.

On a final note, instructions on infusing your own spirits are easy to come by online, but here are a few tips and tricks I’ve learned from experience and haven’t seen elsewhere:

I keep seeing articles in (otherwise reputable) food blogs on the controversy of poached eggs and the difficulty of making them. It’s like arguing about how to pick your nose: anyone can figure it out and ultimately, you do it however feels best. 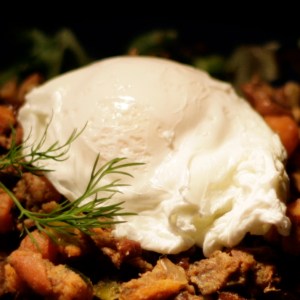 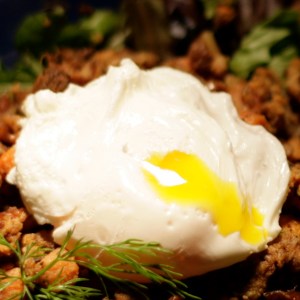 I find it easiest and most reliable to bring 2 inches of water to a gentle boil, add a tablespoon of vinegar, crack the eggs directly into the pot and don’t touch it again until they are done.  I’ve never had one come out badly.