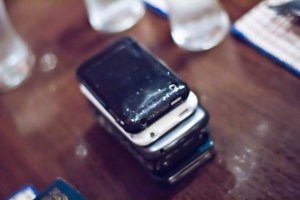 My new favorite group dining experience was thrust upon me last week over the best Thai Food in the Richmond District. Quite simply, everyone piles their phones in the middle of the table at the start of dinner, face down. The first person to reach for their phone – before the check comes – buys dinner.

The year of the Rabbit is coming to an end and the Dragon is upon us, so I should throw another party.

I generally invite 20-30 people to my tiny apartment and serve 8-10 courses over the span of the evening. This year, I would like to get out of the kitchen, so we are going to shake it up a bit, but be no less ambitious.

1. Since it is a Water Dragon year, there will be several interstitial liquid courses, and by that I mean shots.  Between courses, we’ll have a palate-cleansing round of Red Dragon Shots, Golden Dragon Shots, etc.

2. All of the utensils and dishes will be compostable, because I don’t wanna do dishes.

3. Food will be prepped to the heat-and-serve level. Nothing fried, as it requires too much attention.

Dragon Ribs (probably just my OMG ribs again, but grilled instead of pan-fried) 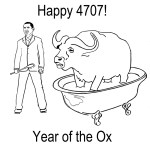 Looking back at previous invites, I also realized that I must craft another absurd illustrated invitation.  Hmmm… something with dragons and current events… Occupy Mordor? “HeardAbout features one delicious dish each day handpicked by our community of passionate local food bloggers, chefs, and restaurateurs. Occasionally we provide offers to try featured dishes for less – this is free to the local businesses (we take no commission or fee) and the offers are free for users to claim. Our goal is to provide authentic recommendations and to motivate locals to try the great food their city has to offer. Every so often we’ll run a sponsored feature (we do have bills to pay, after all) – but we promise these will be relevant and may even include fun offers as well!”

Update: I’m finally posting this midway through the month, and I am doing better than usual, but I’m no saint.  I’ll try to push through with this until I head to Portland at the end of October.

My plan is to spend the month of September spending as little money as possible.

This will likely lead to a lot of time at home, which I will try to spend simplifying my life, ideally:

If you have any advice or words of encouragement, feel free to share, and if you feel like buying me a drink, call me in September.

On a lark, I used mywebsitevalue to see what nermo.com was worth, and the estimate was $40,660.

If anyone is interested, I’ll give you a deal. I’m selling for a measly $40 grand!

If you are looking for an investment, I’m here to make your day.

Seriously, what kind of math is this guy using?

I know, I know! It’s all I’ve posted about lately, but I promise to stop talking about Mac and Cheese soon. SF Food Wars just uploaded these pics, among others, to their Flickr page, and I wanted to post them here for nostalgia, and for anyone else who wants to see them.

This is kind of cool!  the SF Weekly Foodie Blog posted a feature on the SF Food Wars mac and cheese battle, and there is a whole paragraph about my mac! My only issue was that it was prosciutto and homemade chorizo, not bacon.  Bacon is soooooo 2009!

“The Crusty Vermonter,” submitted by the ¢#€€$€ team, was another standout. Sweet apples, sharp cheddar, and salty bacon mixed it up in a balance both hearty and subtle. It was served with little sides of pickles (unnecessary) and mild slaw (good for texture and crunch). This one got the People’s Choice Honorable Mention. A gasp rippled through the crowd after the chef’s big reveal: The cheese sauce was 40 percent Velveeta. 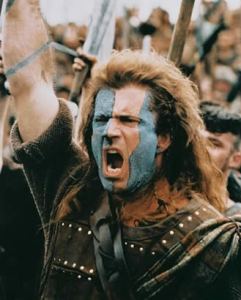 The SF Food Wars “Return of the Mac…Battle Royale w/ Cheese” was a great experience, and I came in a close second in votes. I daresay, that if the guy who won hadn’t brought so many friends (mine weren’t fast enough to get tickets) I think I may have won.

Regardless, the gent from “SF Delicious Catering” who bested me owns a catering company and spent several years working in restaurant kitchens, so I feel pretty good about placing second behind him, especially when so many of the other 15 competitors were professional cooks, chefs and caterers as well, and I have never worked in a kitchen or had formal training.

All said and done, it feels like a Braveheart kind of victory.  I’m sure William Wallace would have defeated the Brits if their generals hadn’t brought so many of their troops, and hadn’t been able to cook in a commercial kitchen while the Scots had to make 50 pounds of mac and cheese on my tiny little apartment stove.

I know I said I would post the recipe, but it was really sunny yesterday and I have a lot of conversions to do in order to scale down the recipe to something reasonable in size, so I will try to get it up here soon.

Thanks to everyone at SF Food Wars and all who came to the event.   I had a blast! Also thanks to my gorgeous sous chef Tamar (pictured below) and to Irwin, who posted some great advice on how to win this battle.

Street food is a big deal all over the world, but right now it is especially a big deal in San Francisco. Last weekend was Eugeapalooza: the Streetcart Wars, this weekend is La Cocina’s Street Food Festival and next weekend is Eat Real Fest, not to mention Off the Grid which happens every Friday at Fort Mason and may be spreading to other neighborhoods soon.

I’ve been threatening to quit my day job and sell food on the streets of San Francisco for a while now, and I need your guidance.

I want to post a quick piece on what a great time I had before and during the Lamb Takedown last weekend. This was my first public cooking competition, and although I didn’t win, the experience of planning, cooking, serving and socializing was spectacular!

Matt Timms, was the ideal organizer and deserves public recognition.  He put together the event, secured a perfect space at Thirsty Bear (with free drinks for the cooks!), got 300 pounds of lamb donated by American Lamb, which cut the costs to competitors greatly, as well as fabulous prizes, and he emceed the event in a way that kept everything running smoothly.  I never heard a single complaint, which is rare in a room with 250 foodies.

My plan was to play to the versatility of lamb as a protein.  I tend to think of it, as many do, as a meat found primarily in Greek and Indian food, but really it works in so many ways. I crafted a very straightforward lamb meatball (well, 300 straightforward lamb meatballs) seasoned with shallots, garlic, cumin, coriander, cinnamon and allspice that is really tasty on its own, but works with a broad spectrum of flavors.  To compliment, I produced a diverse array of sauces and slaw in every color of the rainbow (literally), plus beige and encouraged the eaters to customize them as they saw fit.

I ultimately went with a red marinara, orange sweet and sour, roasted yellow pepper coulis, green mint yogurt, blueberry chili sauce, spicy purple slaw and a beige mushroom gravy. People would ask which was my favorite as they stepped up to the overwhelming selection of squeeze bottles, but I couldn’t pick just one, so I described the applications of each.  I told people that blueberry chili was only for the brave, which goaded a few into putting down the yogurt and giving it a try, and several came back to tell me that the blueberry was their surprise favorite.  I pushed the sweet and sour sauce, because I made a gallon by mistake, and encouraged the mint yogurt as a good balance to the heat of the slaw.

I was fortunate enough to bring along two amazing and lovely assistants, Lizz and Sara who were a blast to hang out with and saved me from unforeseen disaster time and time again, and who rooted for me relentlessly when I wasn’t willing to do enough self-promotion. The highest praise I got was at the end of the day when a woman I believe to be the mother of the overall winner asked for a to-go cup of slaw to put on her son’s pulled pork sandwich later.  She told me not to tell him, because he makes his own slaw, but she would rather use mine.  A couple of professional chef competitors were complimentary as well, including one guy who said I must have cooked to meatballs sous vide to make them so moist, and I had to burst his bubble and tell him that I simply baked them.

As things were wrapping up, several people stopped by on their way out to tell me that I got their vote, or that I was robbed, which totally made my day. I was utterly exhausted, but overwhelmingly delighted by the whole day and am looking forward to the next competitive culinary challenge.